The Republic of South Africa is a land of great diversity which has recently experienced tremendous social upheaval. Its racial and cultural makeup along with its unique history have combined to create a nation which is unlike any other on the African continent. Today South Africa finds itself seeking a national identity which it will carry into the twenty-first century. The present political turmoil provides an unparalleled opportunity for Christians to tell all South Africans about true peace and security which comes only through knowing Christ.

South Africa occupies the southernmost portion of the African continent with an area of 471,445 sq. miles. It is bordered on the south by the Atlantic and Indian Oceans and on the north by the African countries of Namibia, Botswana, Zimbabwe and Mozambique. The country consists of four provinces: Capetown in the south and west, the Orange Free State in the central area, Natal along the eastern coast, and the Transvaal in the north. There are also ten black “homelands” scattered throughout the nation which are self-governing yet considered part of the Republic. The land is rich in natural resources and is among the world’s leading producers of gold, diamonds, chromium, uranium and platinum. It also has the most highly developed industrial base and commercial economy on the continent.

In 1652 a supply station was established for the Dutch East India Company in what is now the area of Capetown by a Dutchman named Jan van Riebeeck. European settlers were encouraged to come to the area to grow crops and provide fresh food for the many ships passing between Europe and Asia. The original Dutch settlers were joined by French and German Protestants seeking escape from religious persecution in Europe. This group of hardy pioneers became known as Boers or Afrikaners and eventually considered the land they were settling and developing as their home, rather than Europe. In 1815 the British gained control of South Africa. The Boers were disillusioned with the policies of the British and migrated inland establishing independent republics. When rich gold fields were discovered in the Boer territory the British interest in controlling the region increased until the entire area came indisputably under their control after the defeat of the Boers in 1902. In 1910 the Union of South Africa was formed giving the nation autonomous government within the British Commonwealth. In 1961 South Africa withdrew from the Commonwealth and the Republic of South Africa was declared independent.

Besides the white population (13.6%), South African society consists of mixed-race groups (8.6%), Asians (2.6%) and the majority blacks (75.2%) from nine major tribal groups, the largest being the Zulu and Xhosa tribes. The system of official racial segregation known as “apartheid,” which was introduced in 1948, has been set aside and the nation is embarking on a new era of democratic rights extended to all people regardless of race. In 1994 the first black president, Nelson Mandela, was elected. He has tried to introduce a number of major social reforms but has been plagued by continued poverty, unemployment, crime and corruption. Such tumultuous change as this has left South Africans with a sense of uncertainty about the future and will hopefully cause more of them to look to Jesus Christ as their source of peace and security.

On March 21, 2003, Dean made a big leap of faith to South Africa where he ministered as a missionary under TCM for 3 years. He worked as an evangelist, trainer and a church planter. On December 3, 2005, Dean married gospel singer Sheba Buagas. Both Dean and Sheba are now missionaries to South Africa.

Bruce Woolard began studying the Bible rightly divided and teaching dispensational truth to the congregation he was pastoring at the time in the city of Port Elizabeth. The Lord gave him opportunity to train and develop other men who in turn began new ministries in other parts of this diverse nation.

In 1989 Pastor Woolard made contact through correspondence with Things to Come Mission. n August of that year Pastor Joe Watkins visited South Africa to survey the work and to evaluate the possibility of TCM working together with the South Africans to develop the ministry which was already going on. These initial contacts proved fruitful and resulted in the formal affiliation of Things to Come Mission with the Association of Grace Churches in South Africa (ABGMSA). Several churches were planted and Grace Berean Bible School was founded, offering Bible and theology courses in 3 locations. In 2018 TCM separated from ABGMSA due to a difference in vision and ministry ethos. 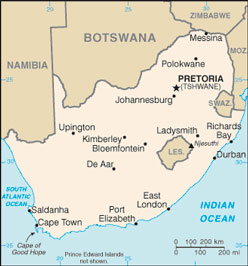