Kenya is a land which epitomizes the wonder and mystique of Africa. In this unique country one can find wild animals roaming vast game parks, white-sand beaches and towering mountains rising above the open, rolling plains. Despite this nation’s magnificent natural beauty, Kenya faces tremendous social and political problems. This instability is causing Kenyans to seek for answers beyond government and human institutions. Kenya is a nation ready to respond to the Gospel of Christ.

Kenya is located in East Africa on the equator. The country covers 224,961 square miles, roughly the size of Texas, and is noted for its diverse landscape and climate. The northern plains are hot, arid and semi-desert. Much of the population in that area is nomadic herdsmen. In the southeast, near the coast, humidity is high and the climate is tropical. The inland Kenyan highlands are bisected by the Great Rift Valley. The climate in the highlands is moderate and the fertile volcanic soils make the area well suited for agriculture. Lake Victoria lies along the southeast border and Mt. Kenya rises in the center of the country to a height of 17,058 feet. There are two rainy seasons: the “long rains” (April-June) and the “short rains” (October- November). The long rains are more reliable and heavier. Recurring drought has brought great hardship to many of the people in recent years.

Kenya’s most well-known natural resource is its many species of exotic wildlife. Such animals as lions, cheetahs, and leopards are common. Kenya is also the home of many rare and endangered species such as the black rhinoceros, zebra, African elephant, and giraffe. People come from around the world to observe these animals in their natural settings making tourism Kenya’s greatest source of foreign currency.

Kenya’s first inhabitants were hunting groups who wandered the vast plains of the area. They mixed with Bantu-speaking peoples of western Africa who had migrated east. Other peoples from Arabia and North Africa also settled in this area and mixed with the original inhabitants. The Kiswahili (Swahili) language was developed by these mixed peoples. In 1887, the British East Africa Company leased the Kenyan coast from the Sultan of Zanzibar. Kenya became a British protectorate in 1895 and a colony in 1920. The British faced a period of violent uprisings in the 1950’s known as the Mau-Mau Rebellion. In 1963 Kenya was granted its independence but remained within the British Commonwealth.

Initial economic growth made Kenya the richest East African country despite its many tribes and languages. From 1963 to 1992 Kenya was controlled by a strong single-party government. Internal unrest and foreign political pressure forced the government to accept multi-party rule in 1992. Sudden reductions in foreign aid coupled with rampant corruption have resulted in a sharply declining standard of living. The per capita GNP of Kenya is US$385.

The population of Kenya is over 32 million with one of the world’s highest annual growth rates (3.5%). The Kenyan people are very diverse with at least 47 distinct ethnic groups which are divided largely along linguistic lines. Such divisions often create social tensions which can result in violence and bloodshed. The official languages of Kenya are English and Swahili, but most people speak one of the many tribal dialects.

As much as 82% of the population is nominally affiliated with a Christian denomination, however many continue to practice traditional religions. There is a great lack of correct spiritual knowledge among Christians. Very few have a proper understanding of God’s grace and salvation through faith in the work of Christ on the Cross. Kenya is a nation which is ripe for revival. Faced with rapid population growth and violent social upheaval the problems of this beautiful nation seem insurmountable. The weak and neglected church is unprepared to meet the difficulties of the new century. Now is the time for Christians to make the move to bring the message of God’s grace to this needy nation.

The ministry of Things to Come Mission (TCM) in Kenya began in 1984 when Vernon and Darlene Anderson answered the invitation of a Kenyan, Festus Njoka, to go and teach the Kenyans about the Gospel of Grace. Convinced that TCM should begin preaching and establishing churches in Kenya, Vernon helped a small group of believers organize under the name Grace Bible Fellowship (GBF). The seeds for growth were planted. The GBF was limited in its ability to grow because of a lack of trained national leaders. For the work to develop there needed to be a training program to equip the nationals with the knowledge and skills necessary for ministry in the local churches.

In 1986 Ben and Joyce Anderson joined Vernon and Darlene to work at establishing a residential Bible School. Grace Bible School was opened in the city Embu in 1989. Since the establishment of the school the number of churches and members has grown 15% per year. Along with the Bible school, many other ministries were developed to help in the growth and development of the local congregations. These include Theological Education by Extension, Bible correspondence courses, and the printing of gospel literature.

The ministry team in Kenya has grown, with several missionaries joining the work in recent years. Jessie Easterly went to Kenya in 1990. She was followed by Cliff and Lou Ellen Kinkead in 1991. In 1992 a young Filipino pastor, Genesis Maraat, arrived to teach in the Bible school and help with evangelism and church planting. Ed and Linda Bedore served from 1994-1996. In 1996 Gardner and Ledith Improso came from the Philippines as missionaries to work in the Bible Institute. In January of 2000 Carlo and Elma Paña joined the ministry team in Kenya as Bible Institute instructors. 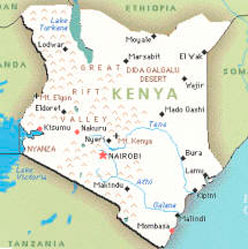