East Timor is often called by its Portuguese name Timor-Leste. The country received independence from Portugal in 1975 and from Indonesia in 2002, making it one of the world’s newest countries. East Timor occupies the mountainous eastern half of Timor Island in southern Indonesia, and is surrounded by beaches and coral reefs.

Traditionally, most Timorese believed in good and evil spirits and gods. During the Portuguese occupation, many people added Catholicism, creating a mixture of the two religions. Today, over 97% of the population identify as Catholics, the largest percentage of any country.
The foreign occupation of East Timor was sometimes violent and did little to develop the people, resulting in low literacy and slow development. The widely spoken language is Tetun, followed by Portuguese and Indonesian. The Tetun Bible contains just the New Testament and Genesis.

TCM is focused on East Timor due to its shared border with Indonesia, where TCM has worked since 1973. A former director of the Indonesian churches set a personal goal of taking the gospel to East Timor, something he could not accomplish due to failing health. TCM has taken up the challenge by including this rugged little country as one of the 11 countries of Southeast Asia.

During the GTCM missionary training of 2017, the Arsino family was challenged to bring the gospel of God’s grace to the Timorese people. Aaron Arsino will enter in mid-2018 with his wife Noemi and three children to follow soon after. The Arsinos have taken Acts 22:21 as a personal challenge: “Then the Lord said to me, ‘Go; I will send you far away to the Gentiles.’ ”

TCM has established TEAM Timor for American believers to partner with the Arsinos. Our desire is to raise support not only for them, but for ministry expenses and for future TEAM missionaries to East Timor who are being trained at GTCM.

The plan is for the Arsinos to begin by learning the Tetun language in Dili, the capital. Their children will enroll in an international school. Then, through friendships the gospel will be proclaimed and Bible studies established. The goal is a growing network of Grace churches. 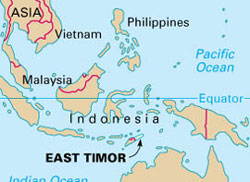