TCM’s Cambodia Team had its beginning when Ariel & Faith Mahilum worked with veteran missionaries Vernon & Darlene Anderson in Cebu City, Philippines, where the Mahilums were involved with urban church planting. After being challenged for mission, the Mahilums enrolled in the Asian Center for Mission where they became burdened for the Buddhist nation of Cambodia. Cambodia has experienced tremendous turmoil and suffering during the past few decades. The people want to turn away from that past to something that offers hope. The Mahilums believe that Jesus Christ is the Hope they are looking for.

Reaching Buddhist people requires methods which meet people’s felt needs. When Dr. Ruth Improso heard of this, she traveled to Cambodia and saw that medical clinics are a way of meeting both the physical and spiritual needs of the people. Myra has experience in English school and teaches English classes in several areas. For ten years, a dormitory has met the needs of university students in the city. English, computer and counseling classes are offered. While meeting physical needs, the Team focuses on evangelism, planting churches and training leaders.

The Cambodia ministry is changing in 2018 with the closing of the dormitory and a focus on establishing churches in locations in Phnom Penh and in the village. James and Agape Bermejo have moved to Phnom Penh to work with these churches and associated home fellowships.

Team Cambodia is working together to bring the love of Jesus to this weary land. You, too, can be a part of the Team through prayer, communication and support.

Ariel and Faith Mahilum, with their daughter Pauline, first arrived in Phnom Phenn in 2007. The Mahilums began their ministry in the capital city of Phnom Penh, opening a free dormitory for university students in exchange for attending weekly services and studying “The Highway of Life” and other foundational Bible courses. English, computer and music courses were also a draw for building relationships with Cambodians. As Cambodia Team leaders, the Mahilums are actively involved in solidifying TCM’s work throughout the country. The Mahilums are responsible for village ministries based in Cheutil where they have a church building that is used for services and Bible training with youth and children throughout the week.

Myra Omictin moved to Phnom Penh in February 2009. Myra is passionate about evangelism and discpleship. After learning to speak, read and write the Khmer language, she has engaged in personal evangelism with neighbors, university students, ladies at a hair salon and tuk-tuk (public transportation) drivers among others. This has involved visiting regularly with them and hosting game nights, cooking classes and birthday celebrations. Myra has also been actively involved in discipleship and training of ladies who have come to live in the TCM dormitory apartment. She takes these ladies with her to university campuses where they gain practical experience in sharing the gospel by watching how Myra does it, then doing it themselves. She also offers English classes as a form of outreach. On weekends Myra travels out to surrounding villages for outreach to children and their families. Myra has worked alongside her team-mates, Ariel & Faith Mahilum, and local pastor Srouch Sorn to establish the Phnom Penh Grace Church.

Julia Liles entered Cambodia from the UK in 2015 and plunged directly into language study which takes up her weekday mornings. Despite her limited Khmer, she delights in distributing tracts to people she meets (even Buddhist monks!) and engaging in conversations about the Bible and Jesus Christ with neighbors and university students who are genuinely seeking for Truth. Julia is actively involved in discipleship and training women living in the TCM dormitory as well as engaging in the ministries of the Phnom Penh Grace Church, outreaches to children and youth in the surrounding villages and intervention efforts with human trafficking. Julia’s heart desire is to see Cambodians of all ages and walks of life enter into the Grace church to hear God’s Word and receive Christ. She longs to see the current believers develop a heart for evangelism despite their cultural shyness.

James and Agape Bermejo were redirected to the Cambodia Team in October 2017. They are seasoned urban church planters from the Philippines and will be leading the city ministry in Phnom Penh along with Myra and Julia. They live in a house that has meeting rooms and an office. They meet with Cambodians for ministry purposes several times per week. James and Agape are actively studying the Khmer language. 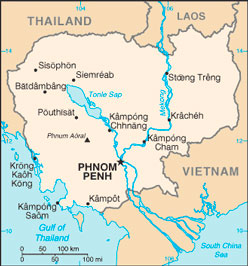