May the grace of God our Father be with All

My dream is to be able to acquire a radio station FM to transmit through the radio signal for the whole city, but the brazilian legislation and a little time consuming, when it comes to grant the radio frequency, but we are waiting, so count on the prayers of all the brothers for that one day we will have this dream come true, that we can connect a stereo and listen to a radio message of Grace being transmitted.

I am grateful for the prayers of the brothers of the Grace and i have to say is that all are always in our prayers and when God touch in their hearts come to Brazil for us to know and learn about our work here, we will be very happy to receive them.

May the grace of God that is abundant in their lives.

Brazil is a vibrant land of color and excitement. This fact is graphically acted out each year during the week-long Carnival which is celebrated with costumes, dancing, music and uninhibited merrymaking. Yet despite this worldly vitality Brazil
exists in spiritual darkness and needs to know Jesus Christ, the One who alone gives true joy and meaning to life.

Brazil is the largest country in South America and the fifth largest in the world covering 3,286,470 square miles. The landscape of this huge nation varies widely from rugged mountains, to expansive grasslands to the lush jungles of the Amazon River Basin. It is a land of abundant natural resources with extensive deposits of iron, manganese, phosphates, platinum, bauxite, uranium, coal and petroleum. The immense tropical rain forests of the Amazon are a unique national treasure and much has been done in recent years to protect their delicate ecological balance. The Amazon is the world’s second longest river extending some 4,000 miles into the interior of South America and discharges 34 million gallons of water per second into the Atlantic Ocean.

Brazil was colonized and controlled by Portugal from 1500 to 1822. When Napoleon captured Lisbon, Portugal, in 1808 the royal family fled to Brazil and established Rio de Janeiro as the seat of the Portuguese empire. When the emperor returned to Lisbon he left his son Dom Pedro to govern Brazil. Popular pressure compelled him to declare Brazil independent in 1822. In 1889 Dom Pedro’s son, Dom Pedro II was deposed by a military coup. Since that time Brazil has
experienced a succession of military takeovers with scattered periods of civilian rule. A return to civilian rule came in 1985.

Despite the huge land area, 90% percent of Brazil’s population of 158.2 million people live on 10% of the land. This is because much of the country is not easily accessible and is inhospitable to habitation. The present capital city, Brasilia, was created for the purpose of encouraging the development of the largely unpopulated interior of the country. Brazil’s two largest cities, Sao Paulo and Rio de Janeiro, together hold more than 16 million people. Almost 50 percent of the population is under 20 years of age.

The Brazilian people are a unique mixture of racial and ethnic groups which reflect the various influences in the nation’s history. About 60% of the population are of European, mostly Portuguese, background and 30% of mixed white and black and or Indian descent. The remainder are black descendants of slaves, Indians and Asians. Most Brazilians claim
nominal loyalty to Roman Catholicism but many are becoming disenchanted with the dead ritual and legalism it represents. As many as 60% of Brazilian Catholics are involved in Spiritist and occultic practices. The nation is plagued by tremendous social problems such as a high crime rate, extensive and severe poverty, and a large number of abused and neglected children.

Brazil has a diversified economy with large manufacturing and agricultural sectors. It is largely self-sufficient in food and consumer goods and is among the world’s largest exporters of coffee, oranges, beef, and iron ore. In recent years the government has been able to control the high inflation which characterized the 1970’s and 1980’s. Despite recent economic gains, the majority of Brazilians still live in poverty and the vast gap between the rich and poor continues to plague the society. For this reason there is general pessimism among the people about the state of the economy and opportunities for improvement.

Brazil is a land of endless horizons, not only physically but spiritually as well. The needs are tremendous and opportunities abound for Christians to offer hope to this great nation by introducing them to the Author of life.

The LeFebers are planting churches and caring for believers in the northeastern city of Recife, population 3.7 million. Doug oversees the establishment of the ministry in the Ibura area of Recife and the ongoing construction of the church building. Vicki is active in AWANA and Project ABBA children’s ministries and with music in the churches.

Joe and Michelle Campos are proclaiming the good news of Jesus Christ to the people of Natal, a city in northeastern Brazil. The goal is to plant a Grace church in that city. Joe is also working with other Brazil missionaries to establish a distance training program using digital technology to raise up pastors and leaders for the churches.

In 1958 the founder of Things to Come Mission, Mr. Herbert Palmer received a response to an advertisement he placed in Moody Monthly magazine which offered Bible Study material to anyone who was interested. This correspondence came from Henrique Schmidt, a man of German descent who had immigrated to Brazil from Russia. He enthusiastically embraced the distinctive “Grace” doctrine presented in the material he received. The rest of his life was committed to seeking the lost for Christ and establishing them firmly in the truth of God’s Word. His efforts yielded considerable fruit having planted several churches in southern Brazil in the area around Curitiba and in the State of Santa Catarina.

In the early 1970’s TCM added three missionary families to assist in developing the ministry in Brazil. These were the Roland (Bud) Wilson, Warren Keiper and Frank Valenza families. All of these missionaries worked for several years helping to build up and train leaders for the churches.

In 1986 Mario and Ella Indino arrived in Brazil to begin the work of establishing a Bible Institute to prepare men and women to minister in the churches. Mario is a Filipino who had served as a TCM missionary in Indonesia, where he met his wife. When they were forced to leave Indonesia they came to Brazil to a new ministry. In March 1987 the Grace Theological Institute opened its doors to students with the first class graduating in 1991. Mario and Ella left Brazil in 1998 to return to Indonesia.

In 1988 Doug and Vicki LeFeber joined TCM as missionaries. They had been serving as missionaries in the city of Recife for a number of years and had established a growing congregation in that city of 2.7 million people. In 1993 their daughter Michelle joined the work as a TCM missionary in her own right. In 1995 Michelle was married to Joaquim Campos and they are currently TCM missionaries to Brazil.

The team of TCM missionaries was joined by Barb Bowman in 1987 who has been active in a variety of ministries which include youth work, music, children’s programs, evangelism and discipleship. Barb married Tony Sistelos in 1993 and together they served with TCM in Brazil.

Another Filipino missionary, Sanny Sumilhig, and his wife Jeannette served in Brazil form 1991 to 1995. In 1994 two more Filipino missionaries, Gomer and Urbana Indino arrived to join the work and help in the development of the ministry. They work in the areas of evangelism, children’s ministries and leadership training. In 1997 the Indinos were joined by Joel and Darcy Molina. Together they worked to renew the churches and develop strong leaders in the churches in southern Brazil. Gomer and Nene are currently TCM missionaries to Brazil. 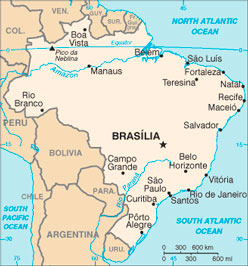