Aaron & Noemi Arsino were accepted as new TCM Team missionaries to pioneer a brand new TCM work in East Timor. In March 2018 Aaron joined TCM International Director, Ben Anderson, and veteran Portuguese-speaking missionaries Gomer and Nene Indino, to survey East Timor.  Survey trips gather information on the spiritual demographics of the country and receptivity of the people and government to gospel outreach, estimated expenses for a missionary living there, visa requirements, suitability for singles/couples/families from varying nationalities, and local contacts. Aaron plans to move to Dili, the capital of East Timor in May 2018 to follow up with contacts and find suitable housing for his family. Noemi and the children will follow within 3 months. Gomer and Nene Indino are praying about relocating from Brazil to join the Arsinos. God has uniquely prepared the Arsinos for outreach among the predominantly Catholic Timorese people, most of whom live in extreme poverty. Noemi grew up in a devout Catholic home until her grandmother’s friend shared the gospel of Grace with them. As the 6th of 9 children, Aaron went to work at age 10 selling hot bread, iced juice and duck eggs on the street to supplement his family’s income. Exposed to the darker side of life, Aaron strayed into a riotous life of drunkenness, smoking, gambling and street fights. The Lord convicted him through a message on the Grace of God, and he decided to attend IGBI to correct his life and follow the footsteps of his parents, the first couple to graduate from what is now IGBI-Tagum. “I could not imagine how good is the Lord God who has called me and counted me worthy for the work in which He has put me in the ministry,” Aaron testifies. “Now I live for the purpose of God in which He will use me to preach the gospel not only in the Philippines but also to the regions beyond.” The Arsinos have learned how to live by faith in total dependence on the Lord.  A month after the birth of their first child, they left him in his grandparents’ care to pioneer the work in Bohol. Noemi writes, “We got there empty-handed, no more money, not even a single penny. But God answered our prayer and provided a family willing to let us stay in their extra room until we can find a rental room. When we got a room, we were still struggling for our daily needs. Our monthly support was not enough since we were sending some of it for our son’s basic needs. We often ate twice a day and only rice or porridge. Every day we lived by faith, asking God to give us more strength and endurance and also patience to finish the course that we started. Finally, by God’s sufficient grace, we were able to gather new converts and establish a regular Sunday service. God blessed our work there, and until today, God is really faithful to His promise that ‘He will never leave us nor forsake us.’” 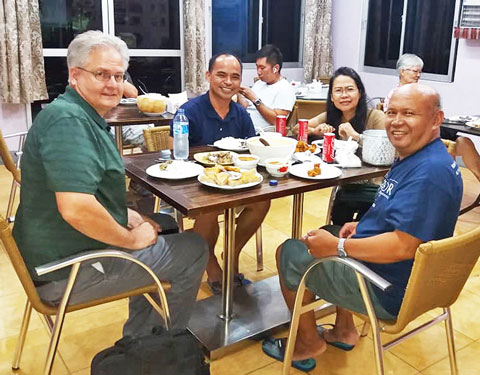